I originally signed up for this race as redemption for last year’s disappointing finish.  I didn’t sign up until mid-March of this year while I hemmed and hawed about doing Ironman Muskoka (two hour drive but brutal course).  I even toyed with the idea of doing both two weeks apart and Chris MacMillan was thinking the same.  Chris was a friend of friends and had done multiple Ironmans and although I didn’t meet him until this year, I had swapped FB messages with him.   We did many of the same races but our paths didn’t cross until this year

We started riding in early May and were fairly compatible speed wise.  As a veteran Ironman finisher, Chris was very knowledgeable and open to answering my questions.  And then came the crash.  I was riding about 25 feet behind him with Touraj further behind.  In a blink of an eye, Chris was badly injured.  Even to this day I can’t what happened.

As this would have been Chris’ 12th Ironman and qualifying for Kona, I wondered what I could do for him.  I talked to several of his friends for some ideas but the best idea was have Ironman make up a special bib with his name on it even though his family cancelled his registration.  I sent an email to Marc Roy (owner of Sportstats and sponsor of IMMT).  Unfortunately I used an old email address and didn’t get any response.  After two weeks, I forwarded my email to Dev Paul who is legendary on Slowtwitch.  I knew he knew Marc and thought he could help.  He forwarded my email to Marc (the proper email address) as well as Dominique Piche (race director).  Finally I got a response and Marc said no problem.  He asked what I wanted on the bib so I contacted Paul and Cathy S and they contacted Chris’ family.  Ironman would insert the special bib in my race package.

Thursday
We arrived on Thursday afternoon after a much quicker drive than previous years.  Last year we were stopping almost every hour (around a nine hour drive).  I guess it helps the kids are getting older.
Admittedly when I was younger, I used to love driving for hours but now I dislike it.  I get very bored and have to be constantly snacking or drinking for the entire seven hour drive.

Seeing that I didn’t register until late March, I was surprised there were still hotels available in the Pedestrian Village.  I booked Ermitage Du Lac which was across the street from Tour des Voyageurs (two minute walk from Transition).   The weather was cool and humid.  Sunday’s weather was looking to be smoking hot and humid (+35 Celsius with the humidity).  This was not going to be good.  This whole summer that’s what the weather has not been and I don’t race well in that type of weather.   I think I only rode twice in that type of weather and the first time I lost five pounds and the second time I lost seven pounds despite drinking over six litres of water.  Each time, I was demolished coming off the bike and trying to run.  This was going to be ugly.

Friday
We woke up to another cool and rainy day.  I wanted to do a swim and bike to check my Garmin after it malfunctioned.   Twice after an open water swim, I couldn’t switch to the next mode and it shut off while downloading.  I called Garmin and they helped me reset everything but I wanted to test it again.  All these gadgets are great when they work but when they don’t, you waste so much time fiddling around with them.

At 10 am I headed over to the Congress Center where a long line up was forming rather quickly.  I normally don’t pick up my race kit until later in the day but was anxious to see if Ironman put Chris’ special bib in my package.  I decided to line up with about 100 people ahead of me and 300 behind.  One guy came up and asked this was the lineup for race pick up?  I told him “this was the lineup for free poutine and beer.”  He didn’t look amused.

One thing I found amusing was once inside registration, at the table where you had to read and sign the usual waiver forms, they had several pairs of reading glasses on each table.  Talk about catering to your clientele!

I finally picked up my bib package and the volunteer opened it up.  She was confused about the extra bibs but I smiled.  This is what Ironman gave me: 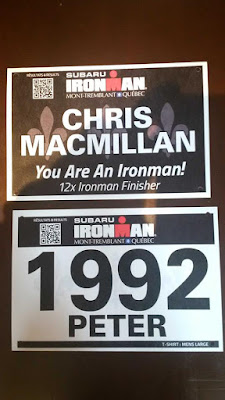 As I stood in front of the last table at registration (preregistration for IMMT 2016) I received a text from my wife.  She had forwarded Paul S' text.  He and Cathy were bringing my bike up.  The text said they were in Ottawa but had forgotten my bike back home and was wondering if I could rent a bike for the race.  Stunned, I walked out of the Congress Center and called Paul.  In the back of my mind I knew he was kidding but I know someone that had traveled to Ottawa with his bike only to leave the race wheels on his porch back home.  He had to get his friend's husband to race up to Ottawa barely getting them in time for his race.  I called Paul only to find out he was kidding.  Whew!

Afterwards I went to the merchandising tent to pick up my Ironman bag when I got an email from Paul, one of my brothers that mom had collapsed and was being rushed to the hospital.  She barely had any pulse.  I could barely think and went back to the hotel room.  I called Don my other brother who had not seen the email and explained the situation.  He said he would head to the hospital and let me know.  I took the kids down to the pool with my phone and waited anxiously for an hour.  Finally I heard back that mom was ok and the doctors were running a battery of tests to find out what happened.  I asked Don if I should come home and he said don't bother as there was nothing to do but wait.  In my mind, I could fly home on Porter and be back late Saturday for bike check in assuming everything was ok.  This was exactly like June 2013 when earlier, my Dad fell down the stairs and broke some bones in his neck.  I was racing Mont Tremblant 70.3 and he was in the hospital.  Again my brother told me to go as there was nothing we could do for Dad.

Later in the day, Environment Canada released this report:


Special Weather Statement: Saint-Donat - Mont-Tremblant Park area
Hot and humid weather for the next few days... Daytime temperatures will near the 30-degree mark during the day and Humidex values will reach 40. Nights will remain warm, with minimum Temperatures expected around 20 degrees. A hot and humid air mass will affect Quebec until Wednesday. The hottest day will be Monday, as temperatures may rise beyond 30 Degrees over several regions. Temperatures will return to Near-seasonal values on Wednesday. Issued at 21:00 Saturday 15 August 2015

What a crazy summer.  Most of the times its been cool and come race day, its smoking hot and humid.  This is going to be a sufferfest of immense proportions and I actually brought my cold weather gear based on last year's temperature.  I won't be needing my arm warmers, booties, gloves, or rain jacket.

Saturday
After picking up my bike from Paul S who had graciously brought my bike up, gave it a tune up and cleaning.  I rode down Montee Ryan to Hwy 117 and back to make sure everything was working as well as the Garmin.  It was only 10 am but smoking hot.  I came back from the 45 minute bike ride dripping wet.  And tomorrow was supposed to be hotter.

Cathy S had suggested using a bandanna and fill it with ice during the run to keep my head cool so I went to the Ironman store and saw one for $28.  I passed on it but bought arm coolers instead.  They were slightly too long (XL) but I think were worth it.  When I got back to the hotel, Tammy had bought the bandanna for me.

Posted by My Boring Triathlon Blog at 9:05 PM