Why Am I So Dumb? Part Duh

So back in October I tried to run without my orthotics which I've worn for more than 15 years.  I ramped up my run fairly quickly while training for a half marathon in mid October and early November.  No problem, because after all, I am an Ironman.  I started to get a dull ache in my right calf which turned into a sharp pain.  I eased back on the run but it still hurt.  Finally I went to the sports doctor and he confirmed a calf tear.  Probably caused by running without orthotics.

By January, I was deemed healed and began to run slowly and began to ramp up the frequency (wearing my orthotics of course) but keeping the distance short.  I also made sure to work in strength training specifically calf raises to nail the calf muscle.  As I felt better, I began to ramp up the speed coming off the bike but still keeping the distance short (5.5 km for about 30 minutes).  It felt great to be running at a fast pace.  I envisioned getting back to my speed when I was training for the Toronto Marathon two winters ago (I think I ran 13 km in one hour during one workout).  Two weeks ago, I had the great idea of 4 runs in a row with strength training on the last day and last week was four days of running followed by heavy workout on my legs.

Well on holiday Monday I wanted to do a 90 bike followed by a 30 minute suffering run after Sunday's long run but while riding, I could feel my calf and when I went to run, my right calf didn't feel right.  Normally, I would have pushed through the run thinking that the ache would magically go away.  Instead, I shut it down after running half way around the block.  The dull ache was back in the same calf but slightly different area.

I made an appointment online to visit my favorite sports doctor in the whole wide world for the next day and yup, another torn calf muscle but in a slightly different spot.  No running for another two weeks however water running or elliptical training would be ok.  Much like a father would speak to his young son, he gently explained that my body can't the type of training I've been doing.  You mean, trying to run a 4:30 min/km brick run several times a week, is NOT a good idea?  Uhhh maybe getting a coach might be a good idea after all.

So, I'm back to square one.  No running.  Again.  Water running is out of the question as its boring and tough to fit in.  That leaves the elliptical *shudder.*  I pride myself on being an all weather runner.  Last summer, I ran when it was 45 degrees C with the humidity (113 F) and I've run in -33 degrees C with the windchill (-28 F).  Me?  Run on an elliptical?  There is one small problem..  I don't have access to an elliptical trainer.  I could rejoin a gym or as my sports doctor says, "you get hurt so often, go out and buy one."

Ugh what to do?

Posted by My Boring Triathlon Blog at 6:10 AM 4 comments: 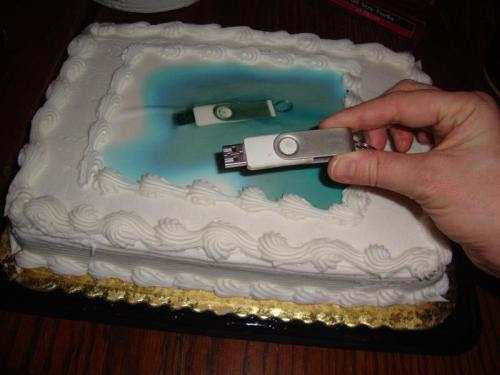 “Well you should have been a little more clear on what image you wanted on your cake!….”
Posted by My Boring Triathlon Blog at 1:45 PM 2 comments:

Weight wise, things haven't been all that good.  When I started this triathlon stuff, I weighted 192 pounds. For Ironman Mont-Tremblant in August, I weighted about 171 pounds.  Monday morning I was 184.4 pounds.  The sad thing is that I haven't been going out to wonderful or extravagant dinners or massive drinking binges.  Rather it's been just a constant grazing of crap food. Superbowl Sunday was a perfect example.  While drinking tea, I decided I wanted some shortbread cookies to dunk so I opened a package and ate six cookies (they weren't even good as the kids didn't eat any).  Then Tammy baked chocolate cookies that we're only 90 calories each, so I ate five cookies.  What is wrong with me?  And here I'm the one telling everyone how easy it is to lose weight.  Stop eating!  At least I didn't have any beers watching the Superbowl. Only one non alcoholic beer!

Over the last couple of months my trainer has been getting louder and louder. In fact, Tammy can hear it in the bedroom on the second floor when I'm riding in the basement at 5:30 am. It also has been chewing my trainer tire to pieces.  One ride was so bad I had little orange flecks of rubber on my back. The last straw was on Friday, when I tried to ride and it felt like the resistant wheel was going to fall off and was totally uneven. I've been toying with the idea of getting an used Computrainer for $1,100 but it comes down to "do I need it or do I want it"?  Yeah I want it but I don't need it.   Then I started looking at the Kinetic Rock and Roll trainer that sways side to side but they're $600. I opted to get the regular Kinetic trainer that are "only" $350.  I went to a LBS that sponsors my (former) training club and offers a 10 percent discount for members.  I walked into the store late Friday afternoon and recognized the guy behind the counter. He's served me before and not the sharpest knife in the drawer.  I asked if they had any Kinetic trainers. He said they're all out but how about a Cyclops trainer?  "Nope, got one and it's a piece of crap." I walked out and went to another LBS around the corner. The sales guy there remembered me and asked how he could help. I replied I wanted a Kinetic trainer and I didn't want a Cyclops because mine is a piece of crap.   "Oh yours is broken?" Well you do know they offer a life time warrantee.  "Ah they do?" I asked.  He called the manufactor in Montreal and they said no problem, send the fly wheel and they"ll fix it for free.  I just pay for shipping.  Sweet!  The only problem, is that it will take about two weeks to fix and ship back.  I checked with Rom and arranged to borrow his as he got a Computrainer. I wanted it for Saturday morning ride so I had to pick it up Friday night except Rom forgot and didn't answer his cell.  I did my long run (all 47 minutes) Saturday morning and in the afternoon I called Peter A and borrowed his trainer as he got a Computrainer as well. Problem solved.

Sunday's ride was for two hours followed by a 30 minute run. I started riding at 5:30 am because Tammy wanted to go to the gym at 8:15 am sharp. The ride was tougher than I remember last year (I'm following last year's Ironman schedule) as basically it was 100 minutes to time trial and out of the saddle riding. By the last set, my quads were burning. I jumped off the bike and changed into my run clothes. Tammy said I had 35 minutes so I took off. The course is about 5.7 km but flat as a pancake. My legs felt like rubber and I started out slow but finished at a 4:30 min/km pace for an overall pace do 5:15 min/km pace. The last 500 meters I really began to suffer.   Hey Stupid, didn't you have a torn calf muscle a couple of weeks ago?  Doh!  At least I finished in just over 30 minutes.  Later that day, my legs felt like rubber walking up and down the stairs

Posted by My Boring Triathlon Blog at 5:04 AM 3 comments: Posted by My Boring Triathlon Blog at 10:09 AM 2 comments: