For the last week, everyone was watching the weather forecast for race day.  Accua Weather kept changing their forecast but by early Sunday morning they were calling for cloudy with thunderstorms at 10:00 am, 2:00 pm and 5 pm with about 5 mm of rain.  Not too bad.  On the other hand The Weather Network was calling for solid rain starting from 10:00 am to 5:00 pm with 40 to 60 mm of rain.  I believed Accua Weather to be correct.

I headed out of the room at 5:00 am to transition to get set up.  It was very humid and windy.  The wind was not a good sign for the bike or the swim.  If it did rain, at least it would be warm.  I made some last minute changes to what clothing I was going to wear for the bike and run.  Several friends mentioned it would be best for a complete change of clothes for the run.  Therefore I opted to wear my cycling jersey during the swim (under my wetsuit) and change into my tri top for the run.

I headed to the swim start with Tammy and Vanessa.  Nearing the beach, the race for the men's pro was about to begin when a CF 18 fighter jet did a flyover.  It flew much lower than previous years and was ear splitting.  Nice to see my tax dollars hard at work (it costs about $60,000 per hour of flight). 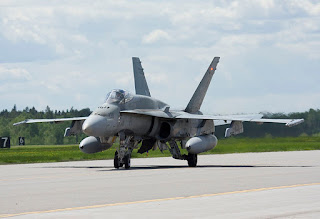 With that, I said good bye and jumped in the lake for a quick warm up.  The water was really warm with a wet suit on and a little choppy.  Two weeks before, I went swimming with Mike M at Jackson's Point on Lake Simcoe.  It was pretty windy and had stirred the water up pretty good.  I was really glad we did that swim.

Last year I had a really great draft in the swim and was hoping for a repeat.  The guy basically plowed through the swimmers from the earlier waves and I just tagged along for the ride.  I kept hopping from swimmer to swimmer looking for a similar ride.  No such luck.  Around the 400 meter mark, I began to catch the previous wave group.  Was it my imagination or was every single slow swimmer swimming along the buoy line?  I can't believe how many times people were crashing into me (or maybe it was me crashing into them).

As we got further out, the waves began to pick up and I began to wonder what I was doing here.  I was getting bored and started counting the buoys.  I thought there were 19 of them spaced 100 meters apart so I was surprised when I got to the red buoy (turn).  By now the waves were quite choppy.  Several times I turned to take a breath, only to get swamped by a wave.  I definitely wasn't having fun.  By now I had caught the slower swimmers from the three waves ahead but still was constantly running into other swimmers.  Why do people who can't swim or need to do the breast stroke swim along the buoy line?  This was by far, the most contact I've had during the swim.  I wondered how Cathy S was doing?  This was not an easy swim.

I had no idea what my swim time was but was pretty disappointed when I looked at my watch and saw 1:17:00.  This was the slowest of four races.  I ran up to the wet suit strippers and sat down while they ripped off my wet suit.  Just then I was struck with a massive cramp in my left hamstring.  I think people thought I was having a heart attack as the medical staff were there pretty quick.  I tried to get up but someone pushed me back down.  The pain as very sharp and they kept asking if I had trouble breathing.  Last year the same thing happened but it didn't last as long.  The medic grabbed my leg and held it up while pushing down my foot.  Finally the pain subsided enough for me to try and get up.  The medic kept yelling at me to stay down but as I stood up, the right hamstring cramped up.  So back down I went until the pain subsided.

Finally I got up and ran/walked/hobbled to transition.  I saw Tammy and the kids along the way. I got my bike transition bag and went into the change tent and it was packed.  There were no chairs to sit on so I changed on the floor.  I put my bike shorts on and stood up.  Right away something didn't feel right.  I had put my bike shorts on backwards.  Awesome.  After spending half the day in the change tent I ran out to get my bike.  At least it wasn't raining.  All right Accua Weather!

Posted by My Boring Triathlon Blog at 9:44 AM 1 comment:

Ironman Mont Tremblant - 2016: Getting There


I decided to change things up for training this year.  In the past, I simply used workouts from previous coaches.  But in November, I bought a Kickr trainer, a fully computerized bike trainer however, to my dismay (and astonishment), it can only be controlled using an iphone, ipad or android phone.  Both Tammy's ipad and iphone were too old to support the app and the only way to use my laptop was to subscribe to a third party software, otherwise I just paid $1,200 for a dumb computerized bike trainer.  After a little research (highly unusual for me), I signed up for Trainerroad.  It had over 800 bike workouts including full training plans ranging from Sprint to Ironman.  I started off with a 8 week base building program and then 6 week build and finally into a 6 week Ironman training program.  Some of the workouts were brutal and almost puke worthy.  In fact, later on in early summer I had to change my workouts to allow for more recovery.  I was hoping these V02 max workouts would translate into a faster bike split.

Heading into the final week before leaving to Mont Tremblant, I needed a bike tune up very badly.  In fact, the last tune up I had was a year ago.  I used Velofix the mobile bike shop.  Mike P gave great service and actually came back a couple of times so I emailed him and I got an "out of office" alert.  He later emailed me and said he would be back on Monday.  No problem, I was leaving on Thursday so plenty of time.  I didn't hear back from him on Monday so I emailed again.  No response.  I started to panic.  It would be almost impossible to get a tune up if I took the bike to a bike shop.  Because Velofix are franchises, I emailed another guy I knew of, Nick D.  At first, he was a little reluctant because I lived in Mike's territory.  I explained I emailed Mike twice and never heard back.  With that Nick came over and after a short 3.5 hours and $400 bill, he had my bike cleaned and ready to go.  I highly recommend Nick.

We arrived in Mont Tremblant on Thursday afternoon and booked the same place as last year.  We enjoyed it so much, we booked before we left, however this year, the room wasn't as great as we were in the basement/ground floor.  It was quite dark and gloomy.  We tried to change but everything was sold out.

One good thing about being on the ground floor is that the deer aren't shy and will come right up to our patio door. 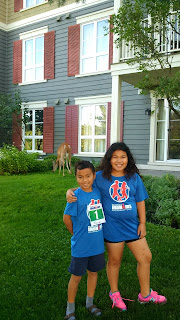 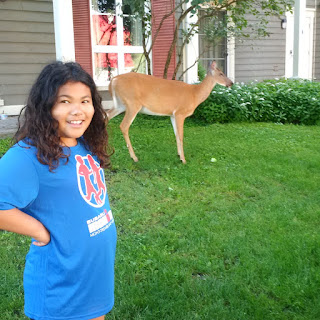 One of the things I like about Ironman Mont Tremblant, is that I usually know a couple of people racing as well.  This year, Scobie, Peter A, Cathy S and Mike M were coming up.  Misery loves company.  And Sunday's weather looks like its going to be miserable.  The weather kept changing but it looked like it was going to rain...lots.

On Saturday, I met up with Mike M and we did a quick 23 minute bike ride up Ch Duplessis to the last big descent from the bottom.  I usually hit over 70 km/hr and did so this time.  I warned Mike to back off on the speed if it was raining.  After that, we did an easy 1,000 meter swim to the Kona Koffee Boat. The water was really chilly at first but after swimming a bit, it felt really warm and we weren't wearing out wetsuits.  I hate coffee but there is something about swimming 500 meters and having a coffee while treading water.


Posted by My Boring Triathlon Blog at 10:49 PM No comments: