Not Good Part I
I tried running this morning but had to stop after 0.53 km. The tweaked hammy returns. Milton is very much in jeopardy but then its only a C race.

Not Good Part II
My buddy Scobie was trying to qualify for Kona by racing Ironman Brazil yesterday. His swim time was a little off at 1.12 but something happened in T1 where he was down for 15 minutes. He must have been pissed because he came roaring out and completed the first leg of the cycling portion (49 km) for an average speed of 40 km/hr. The cycling portion was completed in 5:01 and his run was a little off at 3:48 for a total time of 10:20. No doubt he's in a very foul mood. I'll catch up with him when he gets back for the lowdown.
Posted by My Boring Triathlon Blog at 9:11 AM No comments:

So after a great workout last Saturday consisting of a 45 km bike ride and a 11 km run, I felt pretty good, tired but good. Sunday I worked for 11.5 hours helping Paul build a shed and holiday Monday was gardening around the house. I was exhausted. Good thing this week is a recovery week and everything seemed to be going great for my first race on June 6 in Milton. I've been feeling really good and planned to blast through Milton sprint and Guelph olympic as the races were shorter than my actual workouts. Wednesday's workout was a 45 minute bike ride and then hit the weights. I worked on my legs and abs and everything was ok but I decided to change my Thursday workout and skip Master swim as I had to be on course (the golf course) at 7:48 am Thursday morning so I decided to run instead. But 7 minutes in the run my hamstring started to ache and after another couple of minutes I shut it down and walked back home. I was to tee off in two hours and was worried that I wouldn't be able to walk but after icing it down, my hamstring felt better so I played anyways. While I was golfing I emailed Kevin (gotta love Blackberry) and arranged for him to come over later that night for some treatment.
Wow a home visit. Awesome!!
After some pure torture, he declared it wasn't too bad and I should be able to do Milton after some rest. Whew!
As gratitude, Tammy baked him some Banana Rum cake which I figure has about 500 calories per slice and we washed it down with a cold one. 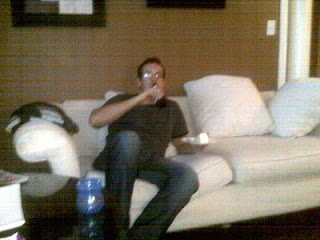 Hope the coach doesn't see this blog!!!!
Posted by My Boring Triathlon Blog at 7:45 AM 3 comments:

I think I figured out why I was sooooo tired early this week. It was probably a result of my body trying to fight off a cold. By Wednesday I had a sore throat, slight fever, sinus congestion and very tired. I went swimming Thursday morning but stayed at the end of the line as I didn't have the energy to swim hard and was quite content to hang at the back. I didn't even finish the last drill (12 x 100 metres front crawl) as once 6:30 am came, I bailed with 500 metres to go. Once I got home I had a diet coke for the caffeine kick and in fact I had several DCs throughout the day to keep awake. Zero chance of doing my 60 minute run Thursday night.

Friday morning was a write off (strength training) as I still felt like crap but by late afternoon was feeling better. I was really unsure if I could do Saturday's workout (90 minute ride and 60 minute run) and it really came down to how I felt Saturday morning. The threat of rain in the morning didn't help either.

I woke up at the usual 4:30 in the morning and felt about 80% and it wasn't raining so I had to go. As mentioned earlier, I'm trying to push harder on the ride and get my average speed up. Today I averaged 28.5 km/hr which is 1 km/hr faster (whoo hooo) than last week's workout. One of these days I'll get it above 30 km/....like when my whole workout is downhill.
The run portion was pretty much uneventful other than the there were lots of garage sales and I stopped and did a quick check for any weights or dumbbells for my strength training. I did go 11.15 km in 60 minutes which is 0.75 km further than last week's run as well.

As soon as I got in, I had to do a quick stretch, shower and eat as I had a massage at 9:00 am. After Rishi killed my for an hour he gave me exercises for my weak ankles. Great, just what I need....more exercises. I definitely need to book more time with him as I'm sure it would be a lot less painful if I got a massage on a regular basis.

One of the problems about training at 5 am every day is that by the time you get to work, you're so tired that you actually don't feel like doing any work and you end up wasting the day watching stupid videos on Youtube


Posted by My Boring Triathlon Blog at 4:03 PM 1 comment:

I think I need to do more core exercises as today was another Brick workout consisting of a good 75 minute ride followed by a 60 minute run. My lower back was sore throughout the run however it could have been the result of my new aero bars that my sister in law was kind enough to let me borrow. I wonder if she even noticed they were gone as Paul took them off her "back up" bike. They are better than the ones that I was using (Paul's old set) as I found I was more stable and not weaving all over the road with every pedal stroke which could be a problem in a race.
I started my run feeling very stiff and sore and hungry. Clearly I didn't eat enough before I started this morning as I had a PBJ (peanut butter and jam - well fake peanut butter as Jake is allergic to nuts) before I headed out at 5:45 am. I drank a bottle of amino vital during the ride while and one gel shot during the run. By the time I finished, I was totally starving and was feeling weak and shaky (did playing ice hockey Friday afternoon have anything to do with it?). According to my heart rate monitor, I burned 1,516 calories but I think I ate a good 900 calories for breakfast. I need to get this nutrition thing down. For my Brick work outs last year (60 minute ride and 35 minute run), I could go out on an empty stomach and take one gel shot but throughout the day I was totally starving. I felt like the Tazmanian Devil and usually wolfed down all my lunch and snacks by 11:30 am and still be hungry. Given this year's Brick workout, I need to eat more before heading out.
Overall, today's work out was ok as I tried to push harder on the bike and keep my heart rate at a consistent zone 3 while my run wasn't as strong as it could be, I'm not too worried as I'm only suppose to be running at a zone 2. Interesting when I started the run, I was going at a painful 6:05 min/km pace but I finished at a easy 5:30 pace. Talk about a negative split. I rode about 35 km and ran 10.5 km in 2 hours and 20 minutes which is pretty much an Olympic distance race.
I cut Thursday's run short as I was supposed to go out for 55 minutes but it started to pour and the wind picked up quite nasty. I was freezing cold and totally drenched so as I ran by my house, I packed it in after only 53 minutes. I felt guilty.
For both Thursday and Saturday's runs, my knee has been ok with just minor aches and pains. No massive sharp, stabbing bouts of pain....yet. Could it be that the exercises prescribed actually work????
Now about my shoulder which has begun to ache after swimming.............again.
Posted by My Boring Triathlon Blog at 3:42 PM No comments:

So this is the first week of my build up. Monday was a Brick workout that called for a 60 minute bike followed by a 55 minute run. I usually go on an empty stomach but I knew there was no way I could survive this workout so I actually ate before I hit the bike. In order to get everything completed (including stretching) that meant that I had to get up at 4:30 am to eat and then I started riding at 4:55 am. Wonderful. What else is there to do at 4:55 in the morning?

Somehow our warm spring has seemed to disappear as its gotten pretty chilly at nights and Monday morning there was a frost warning so I decided to ride inside and watch the Bourne Identity...again. Dripping wet, I changed into a dry t-shirt and headed outside for 55 minutes of fun. My knee was ok but started to ache around the 45 minute mark but I pushed on for the last 10 minutes. I was a little tired but felt ok.

All in all, it was a pretty good workout and I managed to burn 1215 calories. Not bad but I must of ate 900 calories for breakfast and then lunch...........well lets just say, I finished lunch by eating seven or eight chocolate chip cookies that had to be worth at least 250 calories each....doh! Dinner was a salad and some dish with beans and broccoli. This morning I was down half a pound. Whoo hoo!

Swimming was ok but pretty uneventful. Not many swimmers and my shoulder began to ache. I wonder why? Oh right, exercise - or there lack of. How did that go again? Must do exercise, must do.......
Posted by My Boring Triathlon Blog at 1:13 PM No comments:

Just found out one of the guys I used to work with completed his first Ironman in Utah. His time? 10:45!! Unreal and according to my brother, his longest outdoor ride was 120 km and he did most of rides at spinning class
Now why can't I train like that? What the hell is wrong with me?
Posted by My Boring Triathlon Blog at 8:56 PM 1 comment:

No not the kind you smoke, the kind you pull. The trouble with living on a ravine is your backyard is over run with weeds. I spent 4 hours pulling weeds.
I wonder how this counts for training? Strength training for my back or mental toughness?
Posted by My Boring Triathlon Blog at 6:05 PM No comments: