As I head into my third Ironman race, I realize how little I know about racing an Ironman.  Case in point, several weeks ago I was riding with the mighty Peter M (a multiple Ironman finisher and strong biker).  We headed out for a 5 hour ride when my rear water bottle holder broke.  I need to ride with four water bottles (600 ml) as I drink a lot of water even if its not hot.  Unable to fix the holder, I gave Peter one of my half filled water bottle to carry while I carried the other one in my jersey.  The first thing he said was, "Wow, this is heavy."  I thought to myself, "what's he complaining about?  Its only half filled."  I started thinking, when I race, I'm carrying three bottles of nutrition (250ish calories each) and one water bottle which I swap out.  At the bike special needs, I swap three new bottles of nutrition.  That's a lot of extra weight to carry over 180 km but how else would I get 250-300 calories per hour?  Gels?  Ugh.  Three gels per hour for six hours?  Barf.

As we rode, I talked to Peter about how he carries his nutrition and he uses Bonk Breaker.  I wasn't sold on eating solids during an Ironman and while I have a pretty strong stomach, coming off the bike last year at IMMT, my stomach was bloated.  I emailed Scobie about nutrition and he reminded me of the conversation we had several years ago.  He uses one super concentrated bottle of nutrition and picks up water at the aid stations.  Why carry all that extra weight?  Later I weighted a full water bottle and it weighted 1.5 pounds.  Last year I used the store bought Infinit.  It worked ok in training but not so great in the race.  I was bloated and wiped out coming off the bike last year.  With only 70 odd days to go to IMMT, I had to figure this nutrition problem out so I called Infinit Canada.  I spoke with Darcy Haggith CEO of Infinit Canada for about 45 minutes.  He was most helpful in explaining how he used Infinit at IMLP.  As Scobie said, "why make things so complicated?"  Darcy recommended loading one bottle super concentrated of Infinit and carry the other three bottles of water.  One sip of Infinit every 15 minutes and two sips of water.  I ordered a bag for the bike (a different mix for the run).  I told Darcy about my last couple of long rides (150 km+) I felt like crap and Sunday's long runs were a disaster.  He told me I wasn't fueling properly during and after Saturday's long ride.  Nuff said, I ordered a bag of Ride Infinit and Darcy threw in a couple of packages of recovery mix.

I got the package last Friday and mixed up one bottle of super concentrated bottle Infinit (which was about 95% powder and 5% water).  The first thing I noticed it was super salty.  I'm a heavy sweater and have not been taking salt pills on my long ride.  Saturday's long ride was 164 km and I felt great.  I'm pretty sure I was drinking more nutrition and water than normal.  In fact, coming off the bike I ran a 6.60 km hilly run (well as hilly as this area gets) and I still felt good.  I used the recovery mix and couldn't believe what a difference it made.  On Sunday I didn't feel as crappy as the previous two weeks and was able to run 25 km at a half decent pace.  Lesson number one learned.  I ordered the run mix and a bag of recovery mix as well.  I"ll try it next week (this week is a recovery week).

That's all I got.  Ride safe


Posted by My Boring Triathlon Blog at 9:27 PM 1 comment:

Sadly, Chris has passed away.  Unbeknownst to me, Chris was an eleven time Ironman finisher.  This August at Mont-Tremblant his finish would have been number twelve thus allowing him to apply for the Kona Legacy Program.  Anyone who has completed twelve Ironmans and never qualified to get into Kona or win the lottery could apply.

I've only rode outside once since the accident.  It was either too cold or I was sick so Wednesday morning I wanted to get "back in the saddle" so to speak.  I headed out at 5:30 am to go straight up McCowan Road to do some hill repeats.  It was a balmy 8 degrees but felt good to get out.  It was only a 95 minute ride but I think it put my mind at ease

Today we say good bye to Chris.  Here is a story written up in the local newspaper.  Rest easy Chris.  You've earned it. 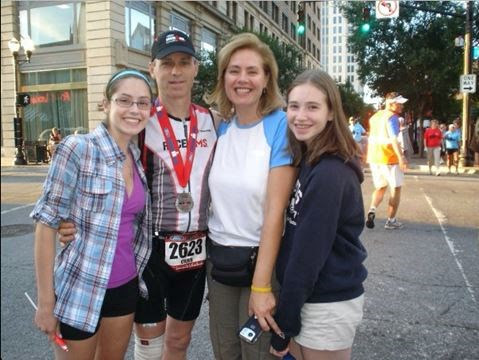 Chris MacMillan relished the challenge of competing in athletic endurance competitions.
In the 20-plus years the Markham resident took part in such endeavours, he was an 11-time Ironman finisher and reached the finish line in numerous marathons before his untimely passing after being involved in a cycling crash May 30.  MacMillan was 56 years old.

Fellow local athletes who competed and trained with MacMillan were sad to hear of his passing. Many of whom had fond memories of the times they interacted with him.

“Chris will always be someone that I remember with nothing but fondness,” said Justin Jakab. “He spent countless hours selflessly helping me to achieve my own goals, and I could always count on him to wait for me at the finish line with a big smile.”

Rommel Domingo was quick to point out MacMillan preferred to keep a relatively low profile and did not boast about his accomplishments.

At the same time, Domingo noted MacMillan made safety a priority whenever he competed.
“He was a humble guy. He never talked about having completed 11 Ironmans. Most Ironman competitors always want to talk about how man races they did, how much mileage they trained, and what race they have coming up. Not Chris though. Ironman was a big part of his life but, he didn`t let these accomplishments define the person he was. He was one of the safest riders I know, which is what makes his accident so tragic,” he said.

Often training with MacMillan at the Stouffville pool, Murray Cass felt his success stemmed from a strong work ethic he possessed.

During competitions, Cass recalled they would often motivate each other.
“Unlike me, Chris always arrived early.  When I met him on the pool deck, invariably he greeted me with a warm smile and often a nice compliment,” he noted. “He was a faster swimmer, so once in the water I rarely saw more than a flash of his feet.

“My fondest memory of Chris was in 2012 at Ironman Mont Tremblant.  As I recall he got on the run course before me.  I caught up with him and we shuffled along together for a bit.  Then I faded and told him to go ahead.  Sometime later I again caught up with him.  We repeated this for probably a couple of hours, one going ahead and then the other.  I think our game of leapfrog managed to keep both of us motivated even though we didn’t really run that much together.  It was almost as though letting the other guy go ahead motivated the laggard to dig deep and catch up.  We even caught that speedy Carol McQuillan and the three of us ran together near the end.

“The next race I’m going to be playing leapfrog with Chris in my mind.  On the lonely marathon, his company will be a beautiful inspiration.”

MacMillan is survived by his mother Carole, brother Stephen, sisters Susan, Amy, Barb and Sarah, Clark Watters and Tim Hardie , life partner Stephanie and was a father to two daughters Katie and Elizabeth.
Posted by My Boring Triathlon Blog at 6:44 AM 2 comments: