I started the run ahem, stroll, around 3:00 pm.  The heat was brutal and with the humidity, it had to be over 35 C.  I ran to the first aid station where Paul and Cathy were working hard as volunteers.  I stopped for a minute to chat with them and then headed off to the old village of Mont Tremblant chewing on some ice that Paul gave me.

The plan was to run five minutes and walk one minute, hills and aid stations but within the first 20 minutes, that plan went out the window.  With a bloated stomach (although not as bad as last year) I wasn't taking in enough calories.  Doing some quick math, according to my Garmin, I burned over 3,200 calories on the bike.  I drank one full bottle of Infinite (250 calories x 3 servings = 750 calories) but only about half of the second bottle (375 calories) for a total of 1,100 calories or so.  That was a calorie deficit of 2,000 calories from the bike alone.  I tried drinking my Infinit run mix but my stomach was too full.  I need to burp or throw up.  In fact, by the time I got to the old village of Mont Tremblant, I pulled over to the side of the road and tried to throw up but hardly anything came out.  A medic came over to me and asked me if I was ok

"Yea I'm ok if I can just throw up" I said
"what??" she asked, "Why don't you sit down?
No way, if I sat down, I probably wouldn't be getting up
"Non, Ca va bien" I replied and started running away

She must of radioed ahead to the next aid station at the start of the Le P'Tit Train du Nord trail as another medic called me by name and asked if I was ok.
"Yea I'm ok" I said as I dumped water down my back and put ice in my bandanna.  The ice felt good but didn't last very long.  My feet were completely soaked from all the water and I was so glad I put body glide on my feet to prevent blisters.

That was pretty much how the first loop went.  Lots of walking and pouring water on myself.  Seeing that I couldn't drink my run mix, I had brought my canister of salt pills from the bike and kept taking them.  If I didn't have them, I would have probably DNFed.

Someone had later said, they have never seen so many people walking on the first loop.  Yup and I was one of them.  Finally I made it back to the resort and ran by the first aid station.  I was surprised to see Paul and Cathy still working hard.  I yelled to Cathy "Chris should have been here to suffer with me!"  Cathy yelled back "he is with you"  The first loop was just miserable.

Just before special needs, I saw Tammy and the kids.  I later found out that they waited 2.5 hours for me.  So much for spending $140 on the GPS tracker.

The second loop started a little better as it was around 5:00 pm and was getting cooler.  I mentioned to someone that my stomach was bloated.  He said his was as well but was drinking Coke and it helped him burp.  As I got to the first aid station, Paul and Cathy had left and I looked for Doru.  I couldn't see him but grabbed some Coke and washed it down with more salt pills.  I'm so thankful I put back up salt pills in my special needs bag.  I had exchanged bottles of Infinite from the bag but still had a hard time drinking it.  In fact my first bottle was half full and when I finished the race my second bottle was half full as well.  So much for my nutrition plan.

I was able to run a lot more but still walked the aid station.  I was dumping ice in my bandanna and drinking coke.  They also started serving Chicken broth.  The best thing ever.  After the turn around on the trail, I started running with Brian.  He was young (23) and very enthusiastic.  He was from New York City and doing his first Ironman.  Talking to someone helped pass the time.  We would walk the aid stations and hills but he was all smiles.  My mood lifted as well as my pace.  Finally at the second turnaround on the trail outside the old village of Mont Tremblant did I feel relieved that we would finish.

We were walking with a big guy for a couple of minutes and talking.  We were on a second loop almost finished and he was on his first.  He asked if we knew what time the run cut off time for the first loop.  I knew there was a cut off time but wasn't sure.  I told him to keep moving as Brian and I started to run.  We debated if he would finish.  I didn't think he would but did see him cross the finish line around 11:30 pm.

As we headed pass the first aid station, I saw Doru.  He was pretty happy and started running along side.  I warned him he'd better not get me DQ'd.  He took this picture 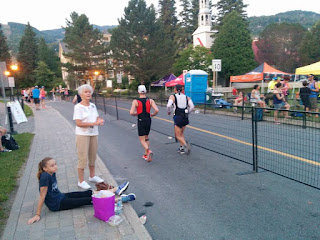 Finally as we headed down the chute, Brian said for me to run ahead.  I told him to go ahead as it was his first and he took off.  I saw Tammy and the kids with Cathy and Paul as I headed down to the finish line.

Later as I visited the porta potty, Cathy and Paul were kind enough to see if they could tip it over.

My mom saw me cross the finish line in the hospital.  One of my brothers was with her and they watched it on his ipad.  She's better now

Posted by My Boring Triathlon Blog at 6:12 AM